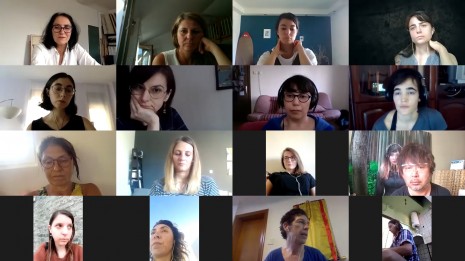 For the fourth consecutive year, Water Tower Art Residency – a continuation of the eponymous art festival (2006-2016) organised by IME Association – will offer

educational resources, experience exchange with international experts and scope for development of socially engaged art. In the pandemic conditions the 2020 WTAR will take place entirely online. From 7 to 14 September, 15 participants will develop web-based projects, guided by invited international mentors, through individual meetings and group workshops. As usual, results will be presented to the public at the end of the residency, on 15 September – this time, in a live stream from the organiser’s YouTube channel. A solo concert by Martian Tabakov – also transmitted live online – will close this year’s public programme. WTAR 2020 is organised with the support of the USA Embassy in Bulgaria.

This year’s residency is aimed not only at developing projects but also ideas and proposals for future research and development of new practical tools of working in the sphere of socially engaged art, in the aftermath of Covid-19. With the wish to nurture dialogue not just between the residency participants but also including members of the public, three of the events form our program will be open to the public with published links to zoom meetings on our facebook page : https://www.facebook.com/watertowerartfest/

On 12 September, Prerana Reddy will present “Supporting Socially Engaged Art Practice”. In this talk audiences will learn about some of the artists A Blade of Grass has supported to create exchanges, experiences, and structures that highlight seemingly intractable social problems, inspire audiences, and energize folks to participate in and sustain long-term social change work. There will also be a discussion about some of the challenges in sustaining socially engaged art, from creating visibility for process-based work with varying degrees of openness to the public, to how one can evaluate the aesthetics and impacts of socially engaged art. Finally, Prerana will share some of the ways ABOG Fellows have been responding to the coronavirus pandemic as well as the uprisings against racial injustice in the United States.

Prerana is the Director of Programs at A Blade of Grass which nurtures socially engaged art through its Fellowship, events, magazine & more. Prior to joining ABOG, she was the Director of Public Events at the Queens Museum of Art, where in addition to organising their screenings, performances, discussions, and community-based collaborative programs and exhibits both on- and offsite, she developed an intensive arts and social justice program for immigrant youth. She was a Douglass Redd Fellow awarded by the Ford Foundation to emerging leaders in the fields of culture and community development. Reddy also worked as documentary filmmaker and researcher whose work has explored such topics as alternatives to juvenile detention, the history of slavery in New York City, and the 2004 World Social Forum in Mumbai.

On 13 September, 20:00, video art legend Gary Hill will invite audiences to take part in his interactive presentation, “I ask the same questions; you give the same answers”: exploring an early work entitled Primarily Speaking 1981-83 and subsequently using that to launch into a discussion about anything that arises from said viewing.

Gary Hill is an American artist who lives and works in Seattle, Washington. Often viewed as one of the foundational artists in video art, based on the single-channel work and video- and sound-based installations of the 1970s and 1980s, he in fact began working in metal sculpture in the late 1960s. Today he is best known for internationally exhibited installations and performance art, concerned as much with innovative language as with technology, and for continuing work in a broad range of media. His longtime work with intermedia explores an array of issues ranging from the physicality of language, synesthesia and perceptual conundrums to ontological space and viewer interactivity. The recipient of many awards, his influential work has been exhibited in most major contemporary art museums worldwide.

On 14 September, Cai Qing The Way of Communication in Art

Cai Qing is a prolific artist, curator, art critic and professor, active in the field of performance art, installation, video and pictures. He spent the 1990s and early 2000s working on projects in Germany and New York, respectively. His extensive curatorial portfolio includes China’s first contemporary art exhibition in a private space, “Trace of Existence” (1998), and “Construction before Destruction” (2008), the last performance show in the Sifo Art Village, He Nan province, before its gentrification.

Presentations of results of artists on 15th September form 18:30 with streaming life video on our facebook page https://www.facebook.com/watertowerartfest/ :

This years participants are:

Followed by streaming live concert of Martyan Tabakov, one of the artists at Studio BELKA from 21:00h.